Memfys Hospital was first established in 2002 as a neurosurgical hospital before expanding into other medical specialties over time. Memfys Hospital is a leader in Neurosurgery in Nigeria and West Africa, providing a service that is outstanding under the leadership of Professor Ohaegbulam. Professor Samuel Ohaegbulam was honoured with the National Merit Award, the highest Order of Merit in Nigeria in 2012 by the President of Nigeria at that time Goodluck Jonathan for Intellectual Achievement in Neurosurgical Medicine. Memfys has a number of in-house Neurosurgery Consultants and Resident Doctors specialising in Neurosurgery. 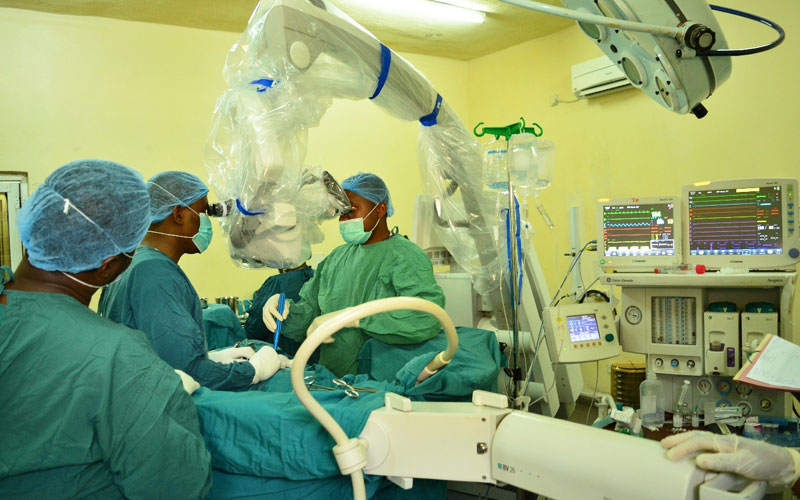 Memfys Hospital offers neurosurgical services for patients with the following diseases and disorders:

Spine disorders often manifest as neck, back or waist pain, abnormalities of the hands and legs including weakness (paralysis), abnormal sensations, changes in the pattern and control of urination and defecation. Most spine diseases managed at memfys include spondylosis and other degenerative diseases of the neck, back and waist. Surgery for spinal cord injury, intervertebral disc prolapse, infections, spine tumours and conditions such as spinal scoliosis are also available. The hospital is also equipped for complex spine instrumentation surgeries.

A brain tumour is an abnormal growth of cells within the brain. Brain tumours are either malignant (cancerous) or benign (do not contain cancer cells). Symptoms of brain tumours include headaches, seizures/convulsions/epilepsy, memory problems, changes in speech, impairment of vision, impairment of hearing, paralysis of hands or legs and some stroke-like manifestations.

Epilepsy is a brain disorder that causes abnormal electrical discharges in the brain resulting in recurrent seizures over the long term. Medicines can control the symptoms. In some cases surgery may help control the seizures.

During a stroke, brain cells die suddenly due to a lack of blood flow and oxygen. This may be caused by an obstruction of blood flow or the rupture of an artery that feeds the brain.

There are two main types of stroke:

- Ischemic stroke occurs when there is interruption of blood flow to parts of the brain.

Aneurysms are abnormal blood-filled pouches that balloon out of weak spots in the wall of an artery.

Some haemorrhagic strokes benefit from neurosurgery.

Memfys offers medical and surgical treatment for stroke including a modern intensive care unit and the hospital’s High Dependency Unit (HDU) which assist in stroke rehabilitation.

Trauma to the head and spinal cord may result from motor vehicle accidents, falls, violence and sports. Traumatic injury can result in neurological impairments in the body including paralysis. The damage affects the nerve fibres passing through the injured area and may impair all or part of the corresponding muscles and nerves below the injury site. Types of traumatic head injury include epidural hematoma (blood clot between the skull and the dura), subdural hematoma (blood clot between the dura and the brain), skull fractures and brain concussion. Some head injuries may benefit from surgery.

Trigeminal neuralgia is a very painful condition that affects the trigeminal nerve, which is one of the most widely distributed nerves in the head. The trigerminal nerve that carries messages between the face and the brain. Treatments include medications, injections or surgery.

Our Neurologists and Neurosurgeons can diagnose and treat children with a range of disorders affecting the central nervous system including: